The first All-Russian Congress of Physiologists was held in Petrograd (Saint Petersburg), Russia in April 1917 at the Medical Institute for Women. Ivan Pavlov was the chairman of the organizing committee for this first “Sechenov Physiological Congress,” but he was unable to attend because of a fractured hip sustained in a fall on December 27, 1916. Nevertheless, Pavlov wrote an address, which was read at the opening of the Congress on April 6, 1917. This was a peculiar address because Pavlov had been denied permission by the Tsar to hold such a conference, which he feared might have political overtones. But, by the time the conference began, the Tsar, Nicolas II, had abdicated (on February 27, 2017), and a provisionary government was in place. Pavlov thus acknowledged the new regime in his address and hoped that it would be sympathetic to the sciences. He also announced the start of a new journal, and his address was published in that journal (the Russian Physiological Journal, vol. 1, nos. 1–2, 1917; also published in Ref. 7). 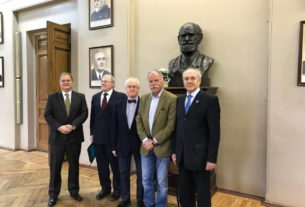